Welcome to the world of the Triple 7 Chase

In the opening days of Iraqi Freedom, Nick Baron and a select group tied to the testing of a new stealth reconnaissance aircraft were thrown half-ready into combat. Their ops tempo hasn't let up since.

T he Triple 7 Chase began as a covert test squadron working on the most secretive Air Force technologies. Under the command of Colonel Richard Walker, however, the unit went operational. Nick's covert team is the most secret of the Tier One units—the last exist beyond the public eye.

Check the links in the slider to learn more about Triple 7 operations. Read below to learn about the unit's name and origins. 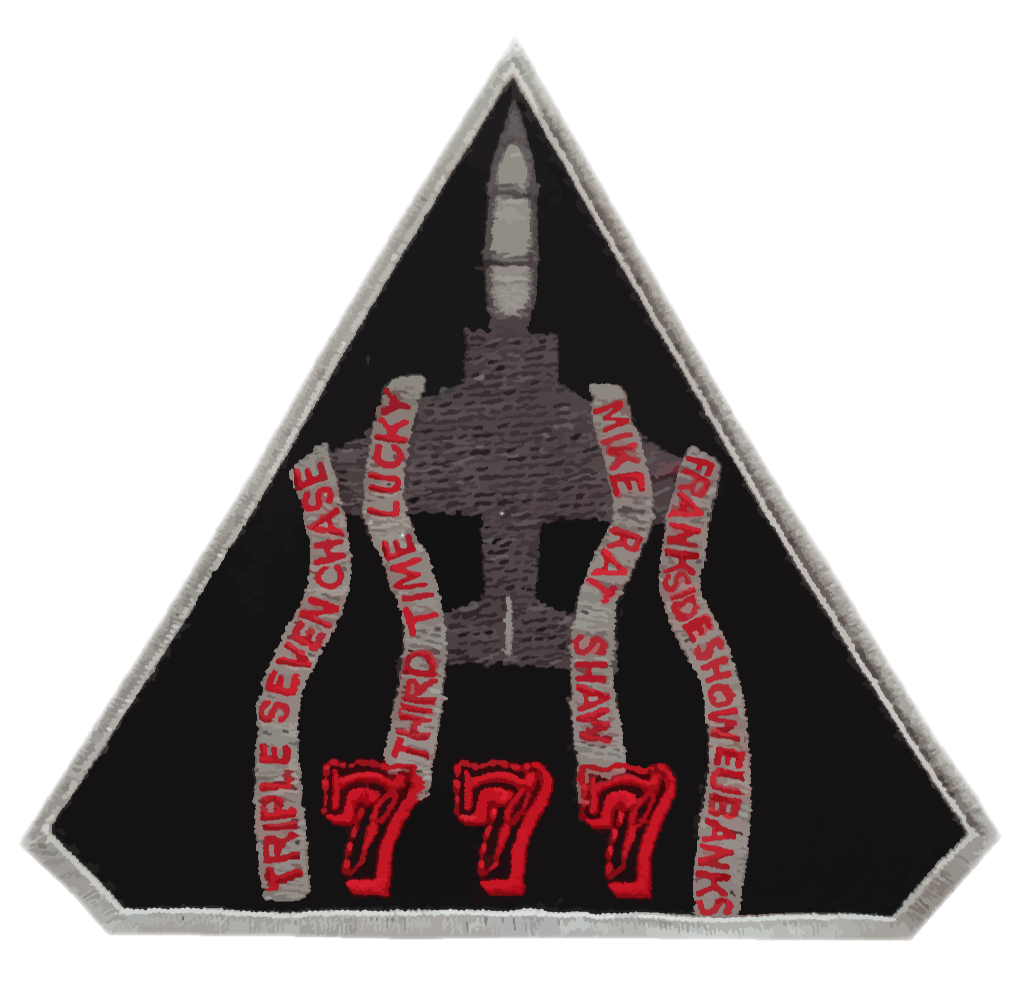 After Nick's first flight with the covert test squadron went pear-shaped and topsy-turvy, the commander of the local test station—Merlin—found him brooding in the squadron's underground break room. Merlin eased Nick's frustrations by sharing the story of the squadron's origins.

rom the pages of WRAITH

Merlin upturned the shaker, dumping a stream of red powder onto his popcorn. “You should be proud of your work tonight. You flew sharp and your presence of mind saved us from a potential second Roswell, not to mention your near suicidal effort to save the B-2. You did the Triple Seven proud, kid.” He popped a handful of reddened popcorn into his mouth, chewed it thoughtfully for a moment, and then nodded as if the seasoning had transformed the bowl of stale kernels into a culinary masterpiece. “Tonight’s events are water under the bridge,” he said, pulling the Triple Seven patch off of his shoulder and placing it on the table between them. “Let’s talk about something else. The Colonel tells me you want to know what all of this means.”

For the first time since the accident, Nick smiled. “Yes, sir, I surely do.”

“As well you should; as any young officer should want to know the history of his unit,” Merlin said pedagogically. “Very well then, in 1972, before you were born if I remember your file correctly, the powers-that-be decided to create a covert chase squadron, separate from the test squadrons around the Air Force. As a result, the Seventh Chase Squadron was born, with four pilots and two shiny new T-38 aircraft.”

“I see you noticed that I said ‘the Seventh Chase’ instead of ‘the Triple Seven Chase,’” said Merlin.

“Keep that in mind for later. As I was saying, four pilots, under the command of Michael ‘Rat’ Shaw, were based at Holloman under various cover assignments. Every day they took off with the dawn patrol in their T-38s and practiced test maneuvers that pushed the edge of sanity.” He paused a moment and then cocked his head to one side. “Have you ever seen the movie Top Gun, where Tom Cruise flies inverted directly over the top of a MiG?” When Merlin said “MiG,” he held up his hands and made quotation signs with his fingers.

“Yeah, there’s not a pilot in America that doesn’t know that scene.”

“True. Well, I don’t know where the Hollywood guys got the idea, but Rat and his band of misfits invented that maneuver long before Tom Cruise was playing beach volleyball and showering with other guys. Anyway, one of the Seventh’s objectives was to test the new laser-guided bombs, and Rat discovered that the easiest method for following a bomb through its parabolic flight path was an inverted dive.” Merlin demonstrated the maneuver with the flying hands most pilots use, holding one inverted over the other.

“Rat and his guys practiced the move on each other, with one T-38 playing the bomb, and one acting as chase. It wasn’t long before his boys were ready for their first real test mission.” The lieutenant colonel scooped another handful of popcorn into his mouth. Nick gathered from the dramatic pause that Rat’s boys were not, in fact, ready.

Merlin wiped red seasoning from his lips. “Shoulda been a milk-run. No bomb. Just a new reconnaissance drone. It was a lot like Dream Catcher but without all of the space age technology. While flying chase during the test, Frank Eubanks had to cross from the left side to the right side of the drone. He should have gone behind, but he went over the top instead, overconfident from all the inverted flying. The drone went out of control and made an abrupt pitch up, right into Frank’s T-38. There was no attempt to eject and no further communications. Both Frank and the drone went down in flames in the desert. The resulting cover-up was a pain in the proverbial neck, but the Seventh survived.”

“Patience, kid. Man, you Generation-X people have no attention span.” Merlin seemed to suddenly realize that the red seasoning carried a little kick. He stood up and headed for the coffee machine. “As I was saying, they buried what was left of Frank, went totally dark for almost a year, then carried on. The next test involved a laser-guided bomb, the kind they had practiced for the first time around. Rat flew the test himself. Once again, things went smoothly for the first few minutes. Rat followed the delivery jet until it climbed and lofted the bomb, then he chased it through its parabolic profile. Just as they’d practiced, he entered an inverted dive above the weapon. This time there was no malfunction. The bomb was following its normal guidance sequence. Rat simply got too close. He failed to remember laser-guided bombs make large corrections.”

Merlin returned with his coffee, pausing before he sat down to take a long, pepper-quenching swallow. “Yeah, it went bang alright,” he said finally. “The weapon made a pitch correction and slammed into Rat’s canopy. That wouldn’t have brought him down with today’s bombs—too stable—but we made ‘em with more volatile stuff back then. The bomb exploded. This time, there was nothing left to bury.”

Merlin set his coffee down and pointed at the ribbons on the patch. “That’s why the names are written in blood red. They're a memoriam to Sideshow Eubanks and Rat Shaw.” He stared quietly down at the patch for a few seconds, as if paying his respects to the dead. “Heads rolled. With two fatal mishaps in as many tests, the squadron was a dismal failure. Everything was shut down.

“Then, in 1984, a Major by the name of Bob Windsor was faced with an ultra-classified project and he had nowhere to conduct his tests. During his research, he stumbled across the records of the Seventh Chase. It was Windsor that pushed for a revival of Biggs North One, attempting to resurrect the Seventh there. He met with resistance. Those who remembered the Seventh considered the whole idea unlucky. But Windsor annoyed his superiors until they finally gave in.”

Merlin popped another piece of popcorn into his mouth and chased it with some coffee. “Under Windsor,” he said with a short swallow, “the squadron took on an entirely new format. Flying with the unit became an additional duty; something you do once in a blue moon. Only the maintenance technicians were permanently assigned. There are two. As for the pilots, there are six. Each has another flying job and returns to the base as the need arises and the clearances allow.”

“But what about the name?” asked Nick, tapping the numbers on the patch with his finger. “How did it become the Triple Seven Chase?”

“Oh, right. I almost forgot.” Merlin's smile indicated he had not. He'd held that part back on purpose. “Windsor came up with it to get around the superstitious folk trying to block the squadron's revival. He melded the unit history into a name and symbol that seemed the essence of luck itself. No one could argue with three sevens. Windsor’s revival represents the third iteration of the Seventh, hence the Triple Seven name and motto ‘Third Time Lucky.’” The older pilot leaned back in his chair. “So there you have it, kid, the whole story. How’d I do?”

“I don’t recommend it for younger audiences," said Nick. "But not bad."

“Thanks, I’ll take that under advisement.”

The author can neither confirm nor deny any questions concerning the truth behind this story.