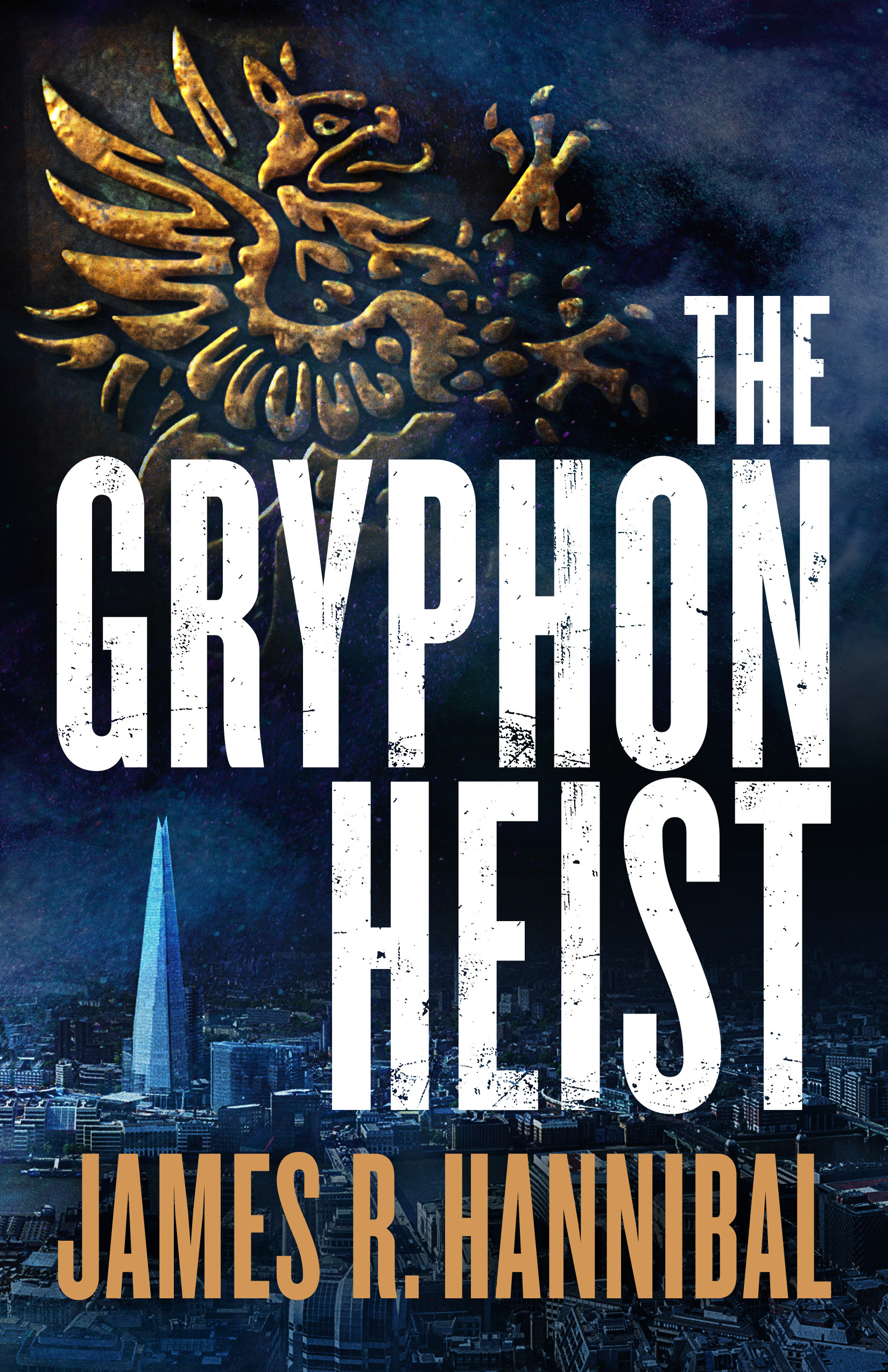 R ookie CIA case officer Talia Inger was not assigned to Moscow Station as she hoped. Instead the Agency has relegated her to the forgotten backwaters of Eastern Europe, in a department only known as "Other."

When she is tasked with helping a young, charming Moldovan executive secure his designs for a revolutionary defense technology, she figures she'll be back in DC within a few days. But that's before she knows where the designs are stored--and who's after them.

With her shady civilian partner, Adam Tyler, Talia takes a deep dive into a world where only criminal minds and unlikely strategies will keep the Gryphon, a high-altitude data vault, hovering in the mesosphere.

But Tyler is more than he seems, and Talia begins to wonder: Is he helping her? Or using her access to CIA resources to pull off an epic heist for his own dark purposes?

In this Ocean's Eleven-meets-Mission Impossible thriller, former tactical deception officer and stealth pilot James R. Hannibal offers you a nonstop thrill ride through the most daring heist ever conceived. 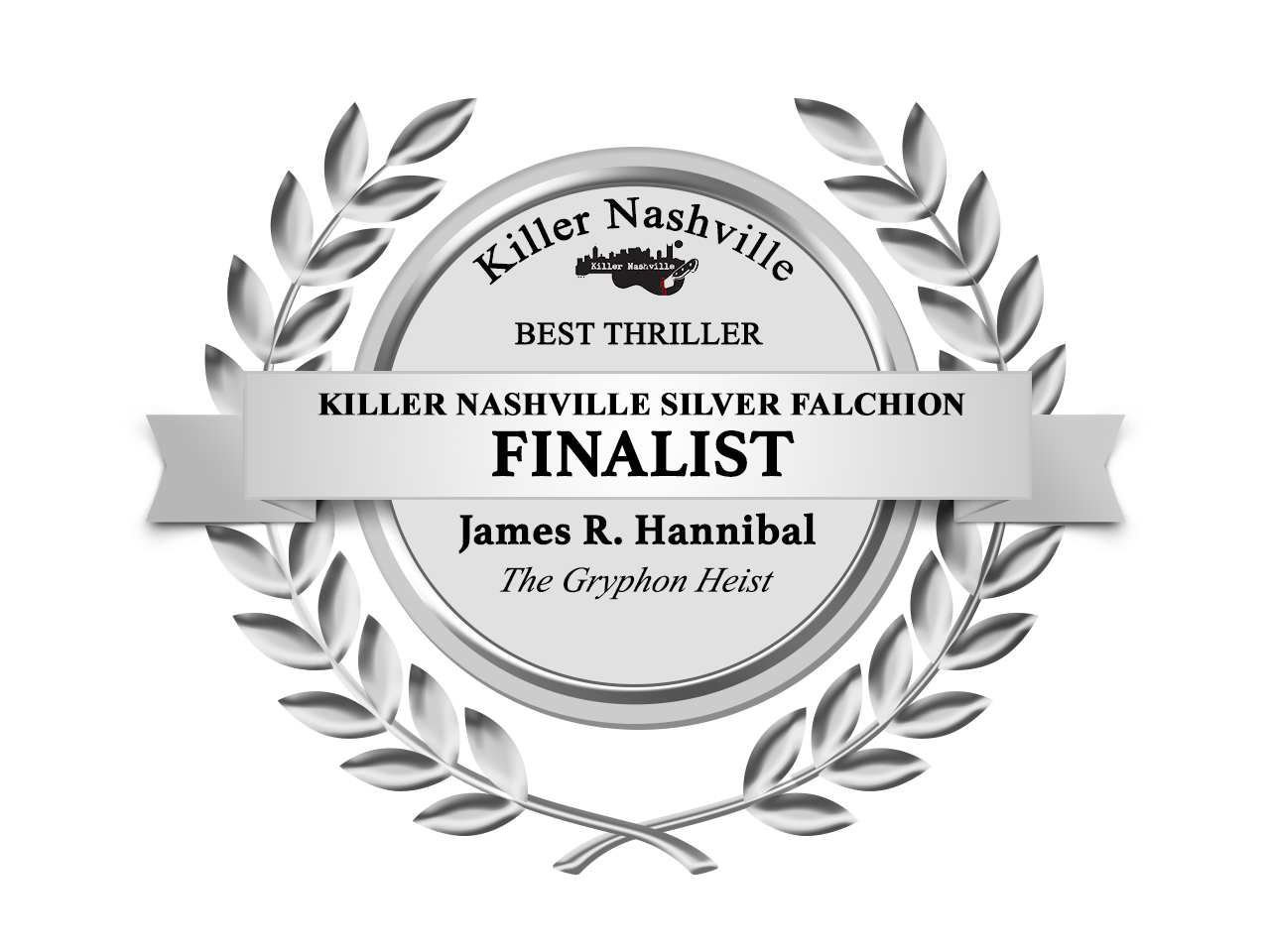 "I couldn’t flip the pages fast enough—or bother to stop to breathe. Don't miss this one!”

"A movie-worthy tale of espionage and intrigue. Hannibal has done it again."

E xcerpt from The Gryphon Heist

Talia Inger clutched her side, letting her shoulder fall against the alley wall. The pain had been growing for the last half hour, threatening to overtake her as it had in Windsor.

Eddie Gupta, her team specialized skills officer, sat cross-legged on the asphalt beside her, hidden from the street by a dumpster defaced with Cyrillic graffiti. He looked up with concern, fingers hovering over a tablet computer. “Are you all right?”

“I’m fine.” Talia shoved the pain to the back of her mind. She wouldn’t fail—not again. “Bring up Whisper One. Show me the square.”

An app expanded to show infrared video of a small city square. A few gray, lukewarm figures drifted across the cold black of the cobblestones. A white heat source flared near the center, blocking out a good bit of the image for a moment before the filters kicked in. The flash subsided to reveal a single individual seated on the edge of a fountain. The hotspot remained where his hand should be for several seconds, then dropped to the ground and was snuffed out, crushed under his heel.

“There’s Borov.” A hint of British Indian colored accent. “He’s giving us the all clear signal. Do you remember his code name?”

Talia shot him a look, and he answered with a sly smile. She remembered everything. Always. Eddie knew that. Her eyes returned to the drone feed. “Escort, Siphon is ready. Move in.”

“On it, Control,” a young woman replied through Talia’s earpiece. “Moving now.”

The infrared camera on Eddie’s Whisper nano-drone picked up another gray figure entering the square from the west, moving toward the fountain at a brisk pace. Even from behind the alley dumpster, two streets away, Talia could hear the echoing clop of the linguist’s designer heels on the stones. “Take it easy, Kayla,” she said, using the girl’s name instead of her call sign to be sure she caught her attention. Kayla hated the handle Escort, anyway. “Slow is fast, remember?”

The linguist slowed her pace to an exaggerated stroll. Talia closed her eyes and shook her head. She should have kept her mouth shut. The abrupt change enough to draw the attention of any local opposition. She held her breath. The pain in her side flared. But no enemy forces stormed in to grab Kayla.

Alexi Borov’s deep grumble came to her through the comm link—a low, intense string of Belarusian. When he moved to stand, Kayla touched his arm and sat beside him, offering what Talia hoped were whispered assurances of his safety. After a few tense seconds, he nodded. More grumbles. Kayla switched to English. “Two, six, nine, seven.”

In the silence that followed, Eddie glanced up at Talia. She gave him a smile, made thin by her pain. “We’ll make it. It’s been a year. We can last another twenty minutes.”

One year of academics, field craft, and mock missions, knowing everything—fake embassy balls, live-fire exercises, chance meetings with undercover agents in Chestertown—everything was a test. Talia’s only break had been the TGT—the Trainee Grand Tour—which had taken her across four continents in two months, sampling every menial, low-risk job the Agency could offer. And even that had ended in a twenty-page evaluation from six different supervisors. One year of weeding out the chaff.

Only five candidates remained. Tonight was their final exam.

Success hinged on two interconnected objectives: extract a Belarusian scientist from an urban environment and use his access code to steal a device from a corporate lab. They had Siphon in hand. Once Black Bag recovered the device and Talia got them all to the extraction point, the rest was pomp and paperwork. She would pass through the black curtain into the CIA’s Directorate of Operations, better known as the Clandestine Service.

Scott, the candidate who had read back the numeric sequence, broke the silence on the comms. “Green light, Control. Code one was solid. Black Bag is inside the compound.”

“Copy.” Talia widened her eyes at Eddie in a here we go look. “Escort, Siphon’s info is genuine. Get him to the bridge.”

Eddie tapped the screen again. The first window shrank to half its size and a second window labeled whisper two opened beside it, giving them a bird’s-eye view of a walled compound. Four L-shaped office buildings surrounded a flat bunker. Two gray figures, her teammates Hannah and Scott, slipped through a gate in the south wall and crouch-ran to the shadows of the nearest structure. Another pair casually strolled in their direction, leaving the central bunker. None of the candidates knew what waited inside that bunker, the infamous Sanctum. No graduate had ever revealed the answer. They were spies, after all, and what good were spies who couldn’t keep secrets?

“Black Bag, two guards are headed your way. Use the eastern approach.”

“Copy. Hannah and I are moving east. We’ll be at the door in minutes, Control. We need the second code.”

Talia gave Kayla a chance to reply, but the linguist was busy. She and Borov had stopped at the exit from the square, arguing in whispered Belarusian.

“Siphon says the western street will be watched.” Kayla turned north, letting the mock scientist take the lead. “He knows a better route, to the south.”

Eddie opened his mouth to protest, but Talia held up a hand to quiet him. She called up a map of the city in her head and looked for a route to the bridge. It would work. “That’s fine, Escort. Tell him we need the second code, though.”

“He says we’ll get it when we’re out of danger.”

“Great.” Scott’s usual pessimism came in loud and clear. “So we play hide and seek with armed guards until Siphon gets a warm, fuzzy feeling inside? Escort, shove your gun in his ear and see if that changes his mind.”

“Negative, Black Bag,” Talia said. “That’s not how we do business.”

“Right. I forgot who was running this op. Miss Everything by the Book.”

Strange motion on the video feed cut the argument short. Talia watched as the roof of the Sanctum expanded to fill the frame. “Eddie, check Whisper Two. You’ve got a runaway zoom.”

The SSO tapped the screen, frowned, and tapped harder as granules of cinder on the roof rushed toward the lens. The feed went black.

Scott’s voice grew tense on the audio link. “We heard a crunch from the Sanctum. The guards are moving that way.”

Eddie locked eyes with Talia. “That was not a zoom issue.”

“I know. Redirect Whisper One. We need to get eyes on our team.”

Kayla and Borov moved out of frame as the drone left them behind. Through the , Talia distinctly heard the scientist say “PrabačcieWith his sorrowful tone and inflection, it sounded so similar to a phrase she knew in Russian. “Prostitye.”

She heard a metallic sptt. Kayla let out a muffled cry. At the same time Whisper One dropped out of the sky and crashed into the Sanctum roof beside the first.

“Kayla? Kayla, respond!” Talia clenched her fist, pounding the brick wall behind her, and then doubled over to stop the needles shooting through her midsection.

The pain had been with her for years, most of her life. But it had not become crippling until the previous spring, at Windsor, in the middle of the national rowing championships. It had cost Talia the gold medal. The team doctors at Georgetown had found nothing. The specialists had checked her kidneys, her liver, her bloodwork. Nothing. Now with her career—her future—on the line, it was back.

“You are not fine.” Eddie stood, taking her elbow to support her.

She pushed him back. “Doesn’t matter. Black Bag, Siphon sold us out. You’re walking into an ambush.”

Scott didn’t answer. They had no visuals and no comms. They would have to breech the Sanctum both deaf and blind.

"Leap on board The Gryphon Heist and ride the whirlwind of suspense. Don’t let go!"