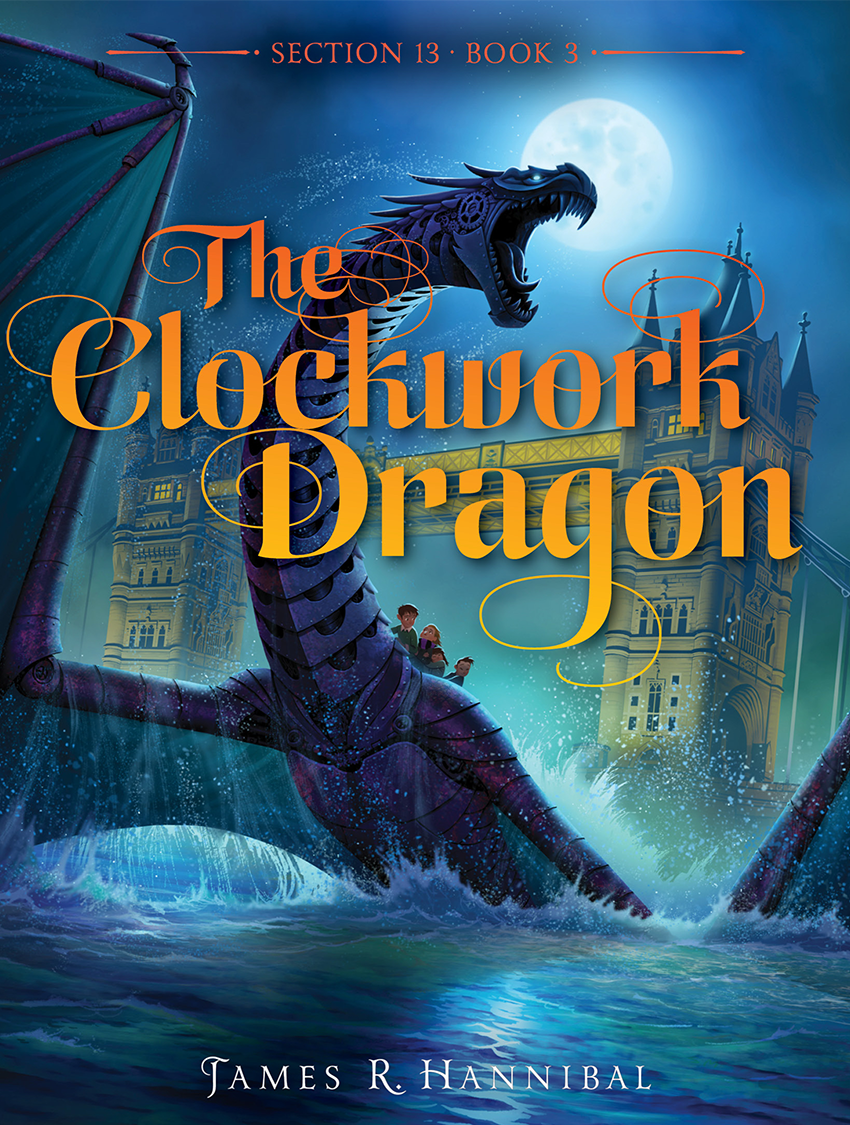 J ack Buckles is on trial for his life.”

The Ministries of Secrets and Guilds, led by Ignatius Gall, are conspiring to put the Ministry of Trackers down for good—starting with Jack’s very existence as a Section 13. His only hope is to prove that Gall is the real danger, not him, and it leads Jack and Gwen from the back streets of London, through the Austrian Alps, to the great reaches of central China.

Joined by their new friend Liu Fai, Jack and Gwen set out to stop Gall before he can uncover ancient Chinese artifacts, said to grant immortality. But a clockwork monster threatens them at every turn, and its turning gears only serve as a reminder that Jack’s judgment day is fast approaching. 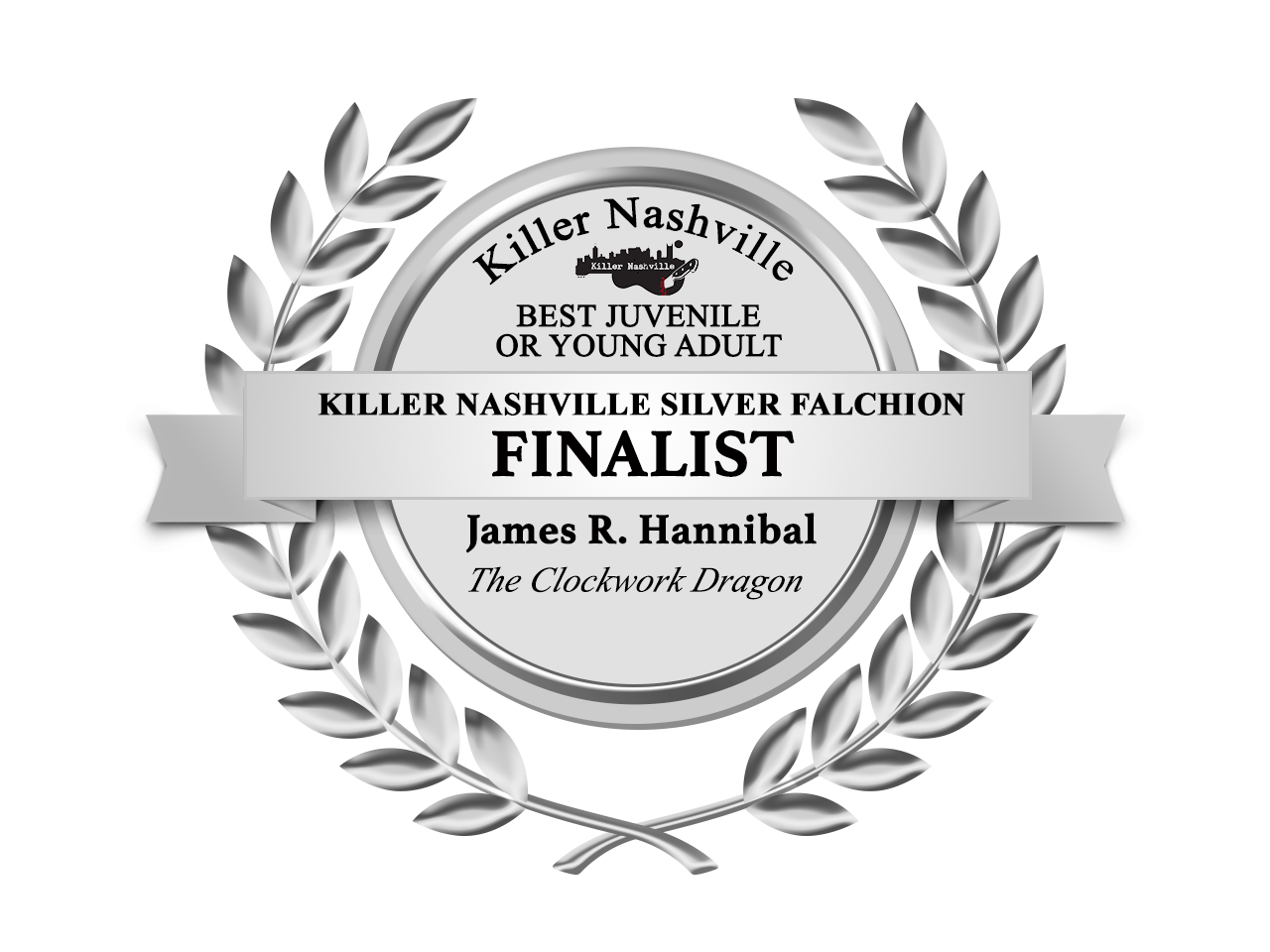 "Hannibal delivers a breakneck conclusion for fans of the series.”

"History, steampunk, and fantasy abound. A packed plot with a quick pace.”

E xcerpt from The Clockwork Dragon

A BRONZE NANO-DRONE ROSE from the cemetery behind Saint Paul’s Cathedral and tilted northward, four spherical engines glowing blue. It ducked beneath a cab on Cheapside, weaved through hurrying knees and boots, and paused in the shadow of a white stone building. When the pedestrian traffic thinned, it popped up over the rooftop, dropping into a hidden courtyard and pushing in through the mail slot of a weathered black door.

Several minutes later, a light ding echoed through an ancient chamber of wood and slate, announcing the arrival of a lift. A man and woman in scarlet robes stepped off and turned toward a judges’ platform at the curve of the horseshoe-shaped room, oblivious to the tiny drone slipping out behind. With a flare of its engines, the drone shot up into the safety of the rafters and set a drifting course among oaken beams, widening its iris to take in the scene below.

A crowd was gathering.

Four separate groups assembled in four separate sections of polished wood bleachers. The first, to the left of the judges’ platform, looked serious, even dangerous, in gray overcoats that sat heavy on their shoulders like steel armor. Every man and woman among them wore a red scarf, bunched up beneath battle-scarred faces as fierce as the fire-breathing dragons sculpted into their high-backed chairs.

Those across the chamber bore more placid expressions and yet appeared no less dangerous, wearing a mix of high-collared suits and black robes. They kept their eyes fixed straight ahead, matching the marble unblinking eye set into the wall behind them. And they remained eerily silent, fingers flicking and tapping at their thighs in a sort of code.

The occupants of the next section down were not silent. They whispered and chattered, guarded by a pair of giant golden statues at the rear corners of their bleachers. They were stuffy sorts in tops and tails, casting dour looks across the chamber at the fourth and final group.

The looks of these toppers, as they were called, were not lost on that last group, known to the rest as the crumbs. A few of the crumbs scowled back through thick spectacles. Others nervously tugged at tweed waistcoats. They were the smallest group by far, huddled in a bunch at the center of chipped and abused bleachers carved with falcons, wolves, owls, and bears.

But unlike the toppers, there were real giants among them.

The nano-drone settled above the judges’ platform and zoomed in on the second judge from the left, an olive-skinned woman in a scarlet robe. She had just pulled a bronze cylinder from a pneumatic tube and cracked it open. She drew out a parchment. The drone snapped a picture.

As soon as the judge opened the pneumatic tube to return the cylinder, the drone idled its engines and dropped, barely scraping the wood backing of her chair.

The woman turned to the judge beside her, cylinder dangling above the open portal. “Did you say something?”

“Only that I hope this doesn’t take all night. The Royal Arbiter and I have a nine o’clock table at the Wig and Pen.”

“I can’t imagine it should. Then again, you know how vicious these ministry squabbles can get.” She dropped the cylinder into the tube, closed the portal, and pressed a brass button. Off it went through twists and turns with the nano-drone clinging to the front, flaring its blue engines in delight.

Find The Clockwork Dragon wherever books are sold.

"Classic storytelling at its level best. Hannibal serves up a seasoned mix of adventure and adolescent angst in sterling fashion.”